I’ve finally finished Parts I and II of the collection and have started to process Part III! Before starting to post all of the wonderful things that will inevitably show up in Part III, I thought it would be nice to show some materials from Part I of the collection one more time. After all, people like to look at old stuff, and Part I goes back an entire century!

The original finding aid for Part I, which was written in the 1970s, was very bare-bones. For hundreds of containers, only the first and last folders were listed on the finding aid, and almost no date ranges were included. Because of this, I requested that the entirety of Part I be brought to my work area for easy access and heavily edited the container list by physically going through every folder in approximately 500 of the 757 boxes. I’ll write more about editing the Part I finding aid later – now I want to talk about one of the great joys of going through these materials and the original finding aid, which was discovering folders with really fun headings! Some of the best headings were in the Dictionary of American Biography (DAB) series, where the folder titles were often just the names of people who were (or weren’t) included in the DAB. My personal favorite is the folder for States Rights Gist (1831-1864), who was recommended for the DAB but not included in the final publication:

“The seventh son and ninth child of Nathaniel and Elizabeth (McDaniel) Gist, States Rights Gist was born in Union County, S. C., and named for his father’s political creed.”

What a conversation starter! Here’s the folder:

The first page of the finished article is an interesting read, and has some fantastic penmanship where there are last-minute extra edits: 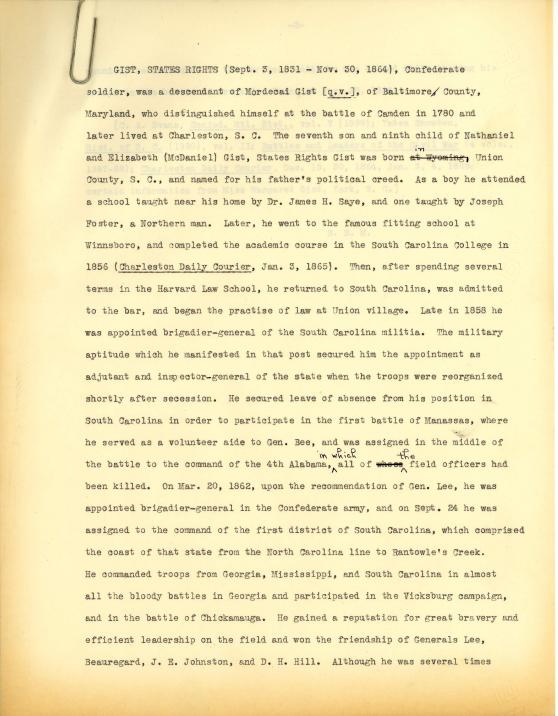 The article draft, though, is even more interesting – this is one of the reasons archives are so important, because they can give you a glimpse into the writing and editing process (something many of us are worried about with the ubiquity of computers and ease of deleting one draft as you save the next). Here are both pages of the draft: 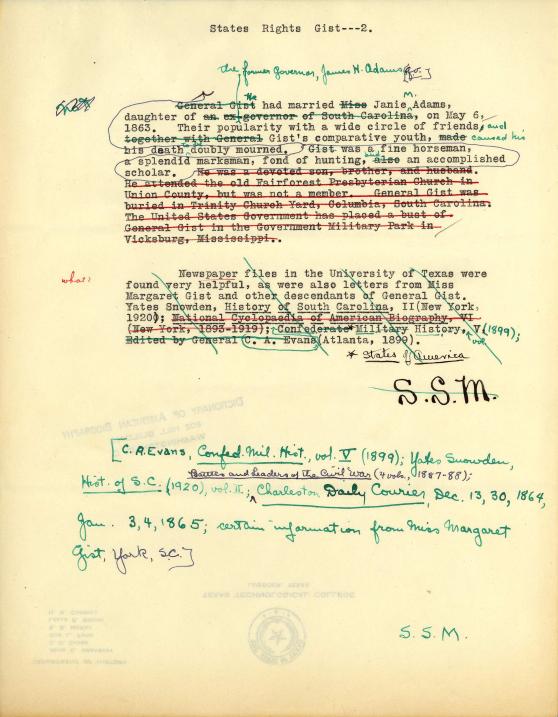 Some other names in the DAB series of which I am particularly fond:

Many of these people were included in the DAB, and many have Wikipedia pages – go ahead and look them up!

The views expressed herein are my own and do not represent the views of the Library of Congress, the American Council of Learned Societies or of any other individual employee.