Last week I promised to start posting interesting records from Part III, so that’s what I’m going to do today! In general, Part III has more recent materials than Parts I and II. This means I’ll be able to share some more contemporary ACLS activities with all of you, highlighting some programs and aspects of the organization that are very much still alive.

One of the things that makes the ACLS so special is the inclusion of constituent societies under its umbrella. Many of the records in this collection focus on these member societies, and one of the most important ways in which they are able to communicate with each other and the ACLS is through the Conference of Administrative Officers (CAO), which “holds semi-annual meetings to discuss substantive issues in the humanities as well as practical and organizational aspects of society management,” according to the ACLS website.

The CAO originally started as the Conference of Secretaries back in 1925. The title was changed in 1988, and the CAO continues to be an essential part of the ACLS mission to strengthen the relationships between its member societies. Before receiving Part III and beginning to process it, I was told that I would be seeing a lot more CAO files in this part than the previous two. This is already true! Three of the thirty boxes that arrived on the first pallet contained CAO materials, including many administrative files. Most of the files regarding the Conference of Secretaries / CAO in the first two parts pertain directly to the semi-annual meetings, with just one or two folders per meeting in general. The CAO files in Part III are rich with information, however, and I’m excited to see more of them as I make my way through this next stage of the project.

My reason for sharing so much about the CAO is simple: The document I’m highlighting this week is from a CAO meeting, and was written by ACLS Vice President Steven Wheatley (with the help of other ACLS staff), whose passion and knowledge are acutely expressed in this document titled “International Programs of the American Council of Learned Societies.” I’ve already waxed poetic about the prevalence of international programs and committees overseen by the ACLS, so you know that the organization has a strong international focus. For this November 1994 CAO retreat, constituent societies also wrote reports about how they had dealt with international matters throughout their histories – these files could be an excellent resource for someone doing a project on international affairs (hint, hint)! As an aside, the CAO spring meeting is happening this weekend, right at the tail end of the ACLS annual meeting, which I feel very honored to be attending (you’ll be hearing about it next week!).

This document begins by stating that the ACLS was founded “to represent American scholarship in international fora,” so indeed, the very creation of the organization was centered on opening up scholarly relationships around the world. To date, I have found materials in the ACLS collection representing every single continent except Antarctica, which is quite a feat. This document outlines the goals, activities, strengths, and problems of the ACLS’ international programs. I always love finding documents like this – they help me understand more about the ACLS and its history, which of course allows me to process the collection in a more straightforward and comprehensive way. Happy reading, everyone. 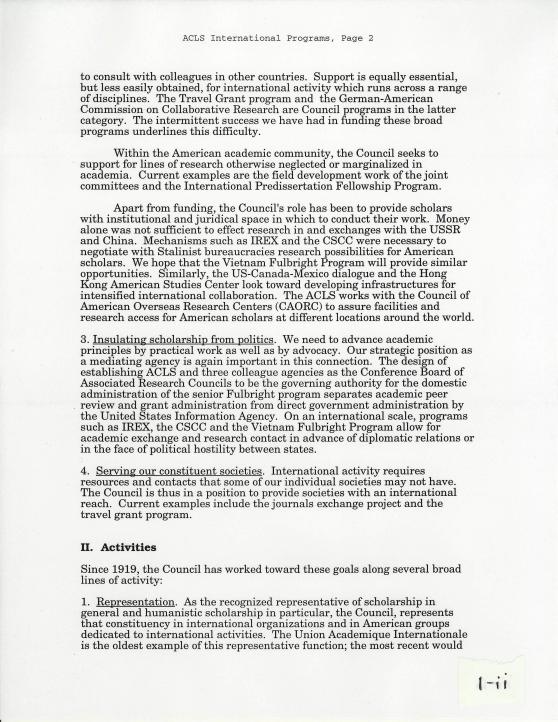 One thought on “Monday Marvels”

The views expressed herein are my own and do not represent the views of the Library of Congress, the American Council of Learned Societies or of any other individual employee.